Cycle routes in the region

Cycle paths in the region

The building of cycle paths in the Pons Danubii region has been going on for a few years but 2014 will bring a major breakthrough in this field. This year will see a 40-kilometre growth in the length of bicycle routes. There are significant development projects under way on both sides of the Danube.  What is more, the construction of cycle paths has been given priority within the government programme in Hungary.

The first major project was implemented in 2009, when a new cycle path was built on the Elizabeth Island in Komárno, Slovakia. The €152,000 project was financed by the municipality, and  a two kilometre-long route was built, which runs along the Danube embankment. The path is very popular nowadays and is used a lot.  Moreover, it might gain further importance after the construction of the new bridge over the Danube, which will have a bicycle lane on it.  In the future there would be a need to extend the existing path to the village of Nová Stráž, which is in the direct vicinity of Komárno. 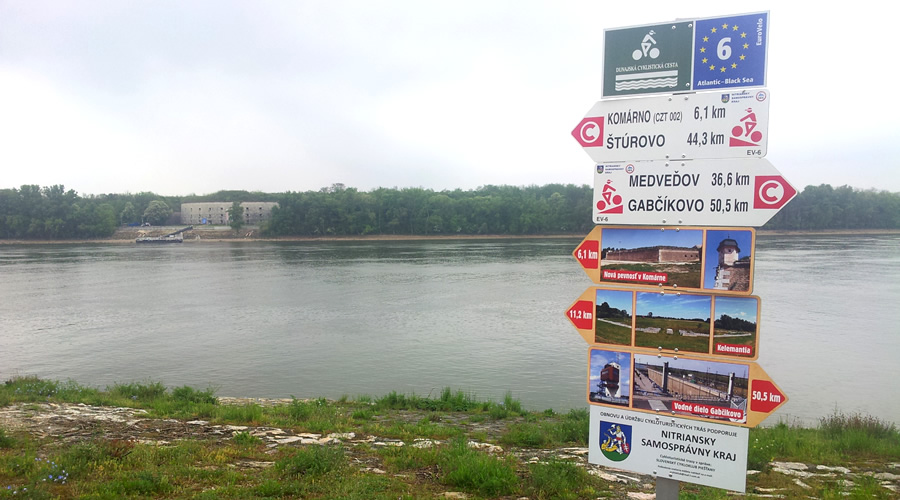 The next major stage of cycle path construction was financed from EU grants.  The project was also led by the municipality of Komárno. A new extension to the existing path was opened in November 2010.  The new 7.03-kilometre-long section is on the embankment of the river Váh and it also goes around the nearby back water lake.  A new 1.33-kilometre-long section was also built around Fort Monostor in the neighbouring town of Komárom, Hungary. The budget of the Hungarian and the Slovakian section was €425,000 and €1.427m, respectively. However, €300,000 was saved during the public procurement, and instead of the planned €1.852m the final total budget amounted only to €1.546m. The municipality covered 5% of the project in the form of own contribution; 10% of the costs were covered from state contribution, and the remaining 85% were financed from EU grants.

A further extension to the section by the river Váh had already been under plan when the existing path was opened.  Its construction will take place in the summer of 2014. The application for grant to finance the building of the cycle path between Komárno and Kolárovo was submitted by the Pons Danubii EGTC in partnership with the Fort Monostor Non-Profit Ltd. in Komárom, Hungary. According to the plans the new section will be built between the back water lake of the river Váh and the town of Kolárovo.  It will be 17.324 kilometres long.  Another 2.2-kilometre-long new section will be constructed around the forts in the neighbouring Komárom, Hungary. 85% of the nearly €2.6m investment will be covered from EU funds in the framework of the cross-border cooperation programme. 10% will be financed from state subsidies and the municipalities will have to provide 5% in the form of own contribution. The contract was signed in the spring of 2014 and the public procurement also took place. The construction company, Strabag, will have to do the work in 30 days by August 2014 the latest.

There is another new cycle path to be built in the summer of 2014 between Komárno and the village of Kravany nad Dunajom. The project was initiated by the municipality of Moča several years ago. A number of circumstances have changed in the past few years.  Consequently, the project was re-budgeted several times and minor changes were also made to it.  After a few unsuccessful applications the project was finally approved, and the contract was signed in April 2014.  This project is also ex post funded and the distribution of contributions will similarly be 85%, 10% and 5%. The project will be financed through the cross-border cooperation programme.

The participating municipalities from Slovakia are the ones of Komárno, Iža, Patince, Radvaň nad Dunajom, Moča and Kravany nad Dunajom and the Hungarian ones are the municipalities of Dunaalmás, Almásfüzitő, Neszmély and Oroszlány. The new path will be built on the Slovak side from an estimated €2.2m.  The remaining €400,000 will be used for the elaboration of planning documents and the getting of permits for the construction of new paths in Hungary. 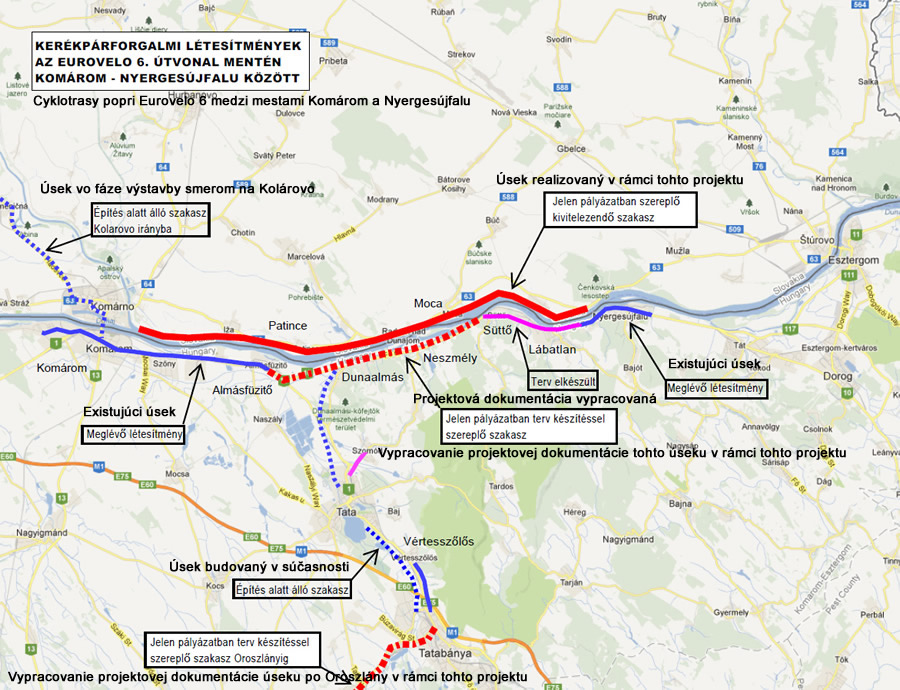 There will be a 28-kilometre-long cycle path, of which 20 kilometres will be newly built. Some sections of the future path are already paved, namely a section in Radvaň nad Dunajom and the one between Kravany nad Dunajom and Moča. This route will also be built by the Strabag construction company in no more than 40 days.

Zoltán Bara, the Director of Pons Danubii welcomed the fact that large development projects are being implemented in the region and he added that he hopes that there will be even more. 'We will continue to follow the calls for application with attention in the future, too. We would like to submit a project proposal for the construction of another path between Komárno and the village of Čičov, since that will be the only missing section along the Danube.  If it was constructed, one could cycle from Bratislava all the way to Kravany nad Dunajom on paths specially designed for bikers," he added. "We think that the development of new facilities along the paths is equally important.  These will contribute to the development of tourism and thus bring along economic advantages and create new jobs," he said.